“What we’re really missing is the smell of blood”

The Aalborg Logistic Regiment is employing new, stinky methods to educate nurses about the harsh realities of war.

Two Danish soldiers are lying severely wounded in the sand. They writhe in pain and scream for help. Both have been hit by an explosion, their lower legs have been blown off, and bloody bone fragments are sticking out of their pant legs. In the hot air hangs a foul stench of burned plastic, paint, and skin damaged by the explosion which just now tore through the air.

Two healthcare workers reach the severely wounded soldiers. They drop to their knees, starting treatment immediately, as they keep talking to the soldiers.

-What’s your name? Do you know where you are? Are you still with me? they ask constantly, as they work on the injuries methodically.

Fortunately, the situation isn’t real. The soldiers are not lying in the Afghan sand, but in a simulator in a container at the Aalborg Barracks, and what is stickin 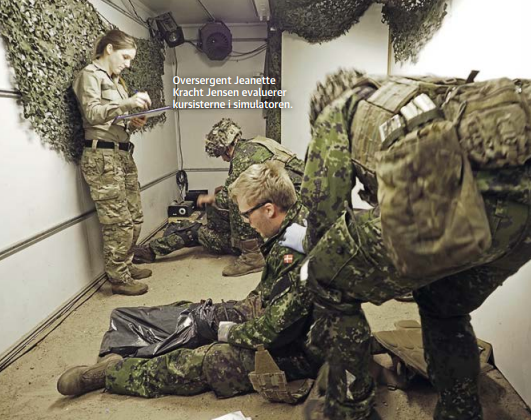 g out of the pant leg is not bone fragments, but foam rubber smeared in fake blood.

The smell, on the other hand, should be quite realistic, and the Logistic Regiment’s newest weapon in the struggle to prepare nurses for the front. Within the year, about 400 men and women will be exposed to this new, stinky tool, and although it may sound disgusting to work in the smell of burned flesh, it is necessary. So says Lars Kling, senior sergeant and the man behind the project.

-Someday, when a 20-year-old boy is sitting with his buddy, who has burns over large parts of his body after an explosion, the smell shouldn’t be what scares him. He will be stressed enough already, says the senior sergeant.

For many years, one of the most difficult things for the Danish Defense to duplicate was smell. They have tried small maroons or used dead rats and burned tires in order to create realistic surroundings. With this scent system, which uses dry air, you get a better effect without any risks to the working environment.

In the United States, the Danish Defense has long been working with artificially created smells in order to improve training. Examples include recreating the smell of rotting trash in an Afghan village, the stench of vomit, diarrhea, or death. This has happened in step with an increasing scientific understanding of the smell as a sense that elicits great emotional reactions.

For Lars Kling, the thought hit him when he was in Afghanistan as a group leader for an ambulance in team 10, and he himself where standing there with severely wounded soldiers in his arms.

-It’s a very long way from training on a nice, level lawn in Northern Jutland to lying in an Afghan ditch surrounded by sand and rocks. We would like to stimulate the trainees in as many ways as possible and create a realistic environment. What we’re really missing is the smell of blood. But it is hard to replicate, and it is under development, says Lars Kling.
For the Danish Defense, there are two primary reasons for bringing smells to bear in the simulator, where, in addition to sand on slanted floorboards, they have camouflage, nature sounds, optional light effects and a screen where the instructors show movies from battles recorded by cameras on the helmets of the soldiers.

In addition to preparing nurses that are reaching a wounded comrade for the first time, it’s about improving the chances that the trainees will remember their training. This works best, if the experience is associated with smell, says Lars Kling. He hopes to be able to establish a collaborative effort between res 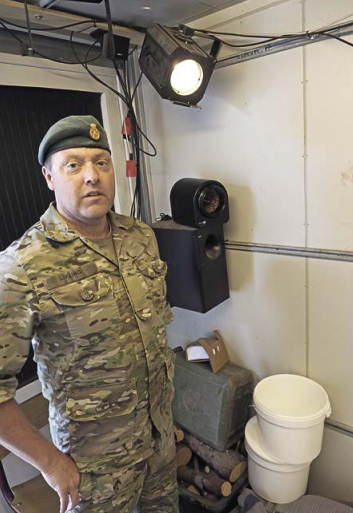 earchers from Aalborg University Hospital in order to document the effects of smell long-term.

This is completely consistent with international development, where smells and scents increasingly are incorporate into education. Thus, it makes perfect sense to use smells in the Danish Defense, believes Thomas Z. Ramsøy, brain scientist and CEO of the company Neurons Inc.

-It is important to be able to work under stress and surrounded by relevant smells, if you want to prepare people optimally, for example for deployment to battle zones. Especially the ugly smells that really have an impact on people. After all, you can’t be exposed to smell in videos, says Thomas Z. Ramsøy.

Contrary to sight, smell goes directly to the brain’s center for emotion and memory, he explains:

-This is one of the reasons why smells can elicit recognition of things and experiences, from childhood, for instance.

In Aalborg, the first team of trainees are almost done with the drill. Patrick Nielsen, normally Private First Class in Holstebro, all but falls out into the sun.

-What the hell is that smell in there, he says, sweating, before he draws the fresh Danish air into his lungs. He chuckles a little at the answer.

-I thought maybe there was something wrong with the container, he says, before the evaluation awaits.

They’re going easy on Patrick Nielsen and the rest of the trainees today, reassures Lars Kling with a bit of a mischievous look.

We are on our way over to a warehouse, where the senior sergeant keeps a white paint bucket with the worst stench they have in the regiment’s arsenal so far. The bucket is standing by itself on the floor in a rack, almost as though everything else around it knows what its hiding. A sweet, nauseating stench pours out, as the lid marked “dead body” comes off.

-We are starting the trainees of nice and easy before we expose them to this. It’s pretty ugly and very realistic. But then again, that’s the point, says Lars Kling.